New data released today by illion has confirmed that early superannuation withdrawal continues to drive a huge spending boom and that the program has not been used as intended by many Australians.

The analysis of de-identified, aggregated information from more than 10,000 Australians who withdrew superannuation early continues to find some disturbing facts about what it was spent on.

Many people may not have needed to access their Super early at all.

With no requirement for documentation to prove income loss prior to allowing access to early Super, it raises the question of whether they really needed the extra money. 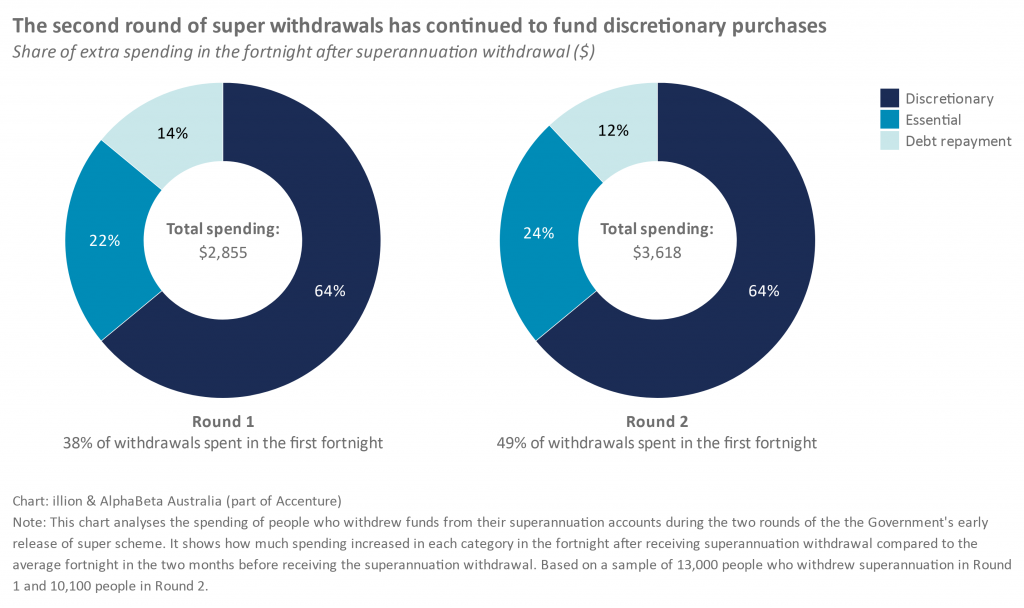 As with the first round of early Super withdrawal, people have used this money to increase their spending, not simply maintain it. Almost two-thirds (64%) of this additional spending was on discretionary items such as clothing, furniture, restaurants and alcohol.

Spending on debt repayments has dropped slightly since the first round of early Super withdrawal (14% to 12%), and there has been an increase in essential spending (22% to 24%).

This second tranche of Super withdrawal and spending follows the same trend as the first round – but at greater levels of spending.

While this policy was aimed as a lifeline, more than half the people that withdrew the second amount had no change in income. In fact, almost a quarter had increased their income and still continued to withdraw from their retirement savings.

These short-term decisions will have a major impact on the retirement incomes of those who withdrew their Super.

For many, the real impacts of early Super withdrawal will only be felt years down the road. A double withdrawal by mum and dad now potentially means that a chunk of their retirement saving has been spent.

The financial impacts of COVID-19 will be with us for a very long time.

Read how the media has reported our latest news: